A little over a year ago, just after the Autumn Equinox, I had a crazy idea. Instead of leaving some savings in a bank account to earn almost no interest, why not buy a field and plant a woodland?

My economics turned out to be way out from reality, since there is a premium on good grazing land around here – it turns out much cheaper to buy almost any woodland than an empty field. And the sort of woodland we can see from our windows that was planted on ex-coal mines twenty odd years ago and then pretty much left to do its own thing, was not much more than the money we had available. If energy follows thought, this idea was put into action in two days!

Energy, however, follows more people’s thoughts than just mine, and even keeping mine pure was a challenge at times. Or it might just be that Spirit has its own perfect timing that makes sure we are prepared. It took months to negotiate a price, and many more months for questioning the contract, long before any solicitors were involved. I visited every month or two, leaving the footpath that runs along one side to find a tree to sit with. I felt more and more comfortable there as time went on, at home, welcomed, loved. I played my recorder at Beltane, I sang.

Eventually a commitment was needed; solicitors needed appointing who would need paying even if the deal fell through. I had made a promise to serve trees, but did they want me to look after them? Was I capable? Was this the right thing to be doing? Would the purchase even go through? I didn’t know. Like so much, as the initial enthusiasm wears off, the enormity of the task starts to make itself apparent. This could be crazy.

I asked Spirit that if we should go ahead and that it would all work out okay to please give me a sign. I considered what sign I would take as a positive confirmation; several thoughts passed through my mind such as a particular type of feather, a toadstool, something colourful, and settled on an orchid as being a very definite sign. This is in a woodland with very few understory plants except for brambles, nettles, and willowherb which frequently block the way through, nothing of any particularly beauty I had ever seen. (Although small, it is not an easy woodland to explore!)

I followed whichever route through the trees I felt like back to the footpath, turning each time my way was blocked. First I found a large goat willow, only the second large tree I have found there, the first also being a goat willow alongside the private track on the opposite side. That was a delight in itself. Many more dead ends followed. Intuition ruled, just going with what felt right. I came a direction I was sure I hadn’t been before, and there in a patch of grass in dappled sunlight was a very bright, knee-high, common spotted orchid. Really stunning, and totally improbable. I wished I had a camera with me.

For the past three months or more (it was mid-July when I saw the orchid), every time I have doubts, or there are delays, I have held the picture of that orchid in my mind. Finally it has paid off. The woodland became ours last Friday. We held a ceremony there on Saturday and walked the bounds for the first time. I hope walking the bounds will be easier in future years after some bramble removal!

I had an amused moment when cooking dinner on Friday night, realising that in all the things I have studied and the jobs I have had, the one I have never felt was ‘me’ was being a mother – and yet here I was cooking, sewing, being a home-maker and doing the job full-time. Maybe I needed the woodland to run away to and escape when it all got too much. Then I realised actually I was suddenly now ‘mother’ to several hundred trees I had promised to look after! I feel overwhelmed, but in a happy, excited way.

As for the orchid, I trust it will grow again and, should I be able to find it next July, I shall take a photograph. My symbol of hope and belief. 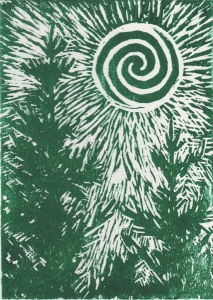 May light fill your hearts and your lives as the sun returns, bringing inspiration and happiness.

I have seen various images of winter trees in lino printing, all snowy white silhouetted against a dark sky. However I needed the sun in my sky, not the moon and stars, so after a lot of thought and several sketches, I came up with this design.

This is a tree I see to the East every morning, growing in a garden a short distance away and now tall enough to show over the rooftops. It always intrigues me to look at things in mirror image when creating lino prints, so I took that idea further by drawing the tree the right way and its mirror – knowing that once printed I would still have the right way and the mirror. For once I drew straight onto the lino, knowing that any copying and image reversing was superfluous.

Last summer I was able to acquire a small roller press, and this was its first use which was a joy. I can still improve my inking, but the ‘misty effect’ improved some of the images for me on this occasion. All a learning process which takes a long time when I seem to do only one a year!

Evergreen plants have long been a symbol of life and fertility for the middle of winter. Many ancient cultures used to bring sprigs of greenery into homes or temples for decoration at this time of year, and that has never stopped. A wreath, to me, symbolises the cyclical wheel of the year, always turning through each season, while trees are life themselves as well as representative of the World Tree from which all life grows. This particular tree is probably an overgrown Christmas tree planted out several years ago…