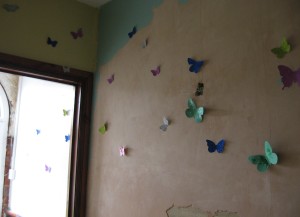 A few of the butterflies in the hall. (Click to enlarge)

This week I am celebrating the arrival of 56 butterflies in our hall. I am hoping their transformative power will help bring positive energy into the house, and the hallway in particular.

Our hall has been a ‘problem’ area ever since we moved in. Originally the walls and ceiling were all a cold turquoise blue, a colour which did nothing for me in the centre of the home. One of the first things I tried to do was to repaint it to something warmer and more neutral. As I have mentioned in these posts before, it did not go well. Trying to clean the old paint with sugar soap worked on the ceiling, which has been white for many years now, and on one side which was painted a soft yellow, but on the wall you see on entering through our double front door, much of the paint flaked off. In removing the remaining loose paint, half of the plaster fell off. The light fitting was unsafe so was removed, and the door frames have never fitted right so aren’t even worth painting. We have plans for a new front door which will be in keeping with the rest of the house, and which will allow us to restore the porch, but structural work is needed to the hall ceiling before this can be done. Since the hall impacts on every other room in the house, it either had to be done first or last – and the decision was made to do it last. So we have lived with this now for 18 years.

I have been doing some work on space clearing and bringing positive energies into the home, so I have been trying to look afresh at this area. It suddenly occurred to me that having a double door into the house was a major block on positive energy entering. There is no immediate way to remedy this – the inner door is an internal door and unable to be exposed to the elements, while the outer door is entirely glass so leaving the inner door open would render me immediately visible to anyone ringing the doorbell before I have even found the key. So after much thought, I decided to create something that would harmonise the spaces and link them together, flowing into the house and up the stairs. I also thought that something sparkly would act a bit like a mirror or crystal and magnify what energy there was. As it happens I had bought a pack of sparkle card in a sale a month ago, and also some glitter pens from the same sale…

I chose butterflies because they are light, gentle, and transformative. They bring beauty and joy, and their bright colours help to raise the vibration. The whole family helped to make them over a few days, and then I stuck them all over the area I wished to transform, with a few spilling over in different directions to the good parts of the house. I particularly wanted to put them on the ‘injured’ area however, the bare plaster, the cracks, the defunct light fittings, the door frames I wish to replace. May they be accepted as they are. Anything extra is a bonus.