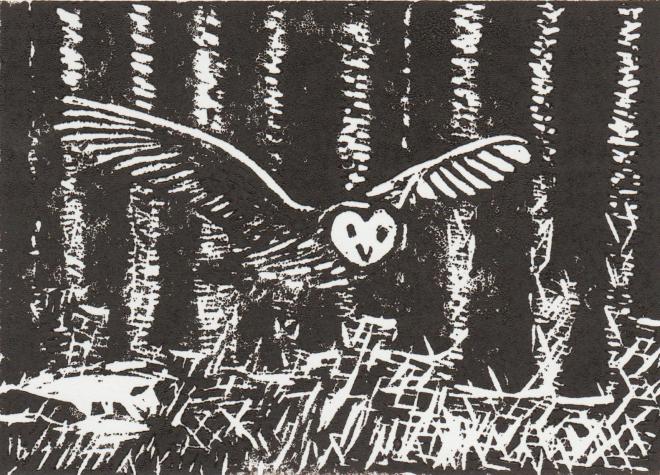 I am not normally an owl person, but I seem to have been aware of them quite a bit recently and they seemed to want me to create some artwork with them. They are after all a common witch’s familiar, along with cat, frog and hare which have been with me for approximately 40, 10 and 2 years respectively. (I’m being selective here, penguins, dragons, snakes and butterflies don’t fit the witch image so well!)

The background idea for this card came to me in the autumn, as the trees lost their leaves and trunks were the most noticeable part. Some of the cards I printed gave the trees a misty effect. Not intentional, it is due to my inefficient inking, but I rather liked it and it matched the weather we were having at the time.

The barn owl is a beauty and one I have occasionally heard calling across valleys, usually when camping, without always knowing what it was. Quite different from the twit twoo of tawny owls! They are not actually woodland creatures, yet the only places I have ever seen them in the wild have been along the edges of woodland, where it opens out to fields.

Owls hunt at night, when it is dark to most creatures, as they have excellent eyesight, much better than their prey. They bring the gifts of far-seeing, and seeing what was previously unseen, into our lives. They also have particularly long necks, so can turn their heads to see what is behind them, or sideways. Sometimes it is good to look at things from another angle. Or sometimes there are things we simply haven’t seen and owl will bring them into focus. Illusions and secrets will be seen through.

Another gift is silence. Thanks to the shape of their feathers with soft edges, owls can fly with far less noise than most birds. The barn owl is particularly well adapted for silence, as it has very large wings so can fly very slowly with no sound. Instead they will be listening; owl hearing is acute as their ears are not symmetrical, allowing them to pinpoint sounds accurately, while their heart-shaped face directs any sounds towards their ears. Listen beyond the background noise to what is really being said.

Unfortunately the payback for soft feathers in Barn owls is a lack of waterproofing. They cannot fly in wet weather, so will sometimes be seen during the day if there have been several wet nights. Take opportunities when they are available, even if it is not what is usually done.

There are many superstitions about owls, especially the barn owl, appearing silently as a ghostly-white apparition in the moonlight. The most common is that they foretell a death. Given the huge numbers of mice and other small animals they must catch each night to feed their family, that is certainly true! Spiritually however, death is often close to change as it usually means the end of something in our lives, ready for something new. Owl does often seem to bring this message, often also bringing an increase of intuition helping to smooth the change.

The Celts believed owls sometimes accompanied souls on their journey to the other side, and owls were often regarded as gatekeepers to other realms.
Conversely the Ancient Greeks liked their protection, particularly in battle, because they were patient and ever watchful. Like the Goddess Athena, they are seen as being full of wisdom and knOWLedge…