Scots Pine story is now posted on its own page, under tree stories. Please click here or follow the links above. 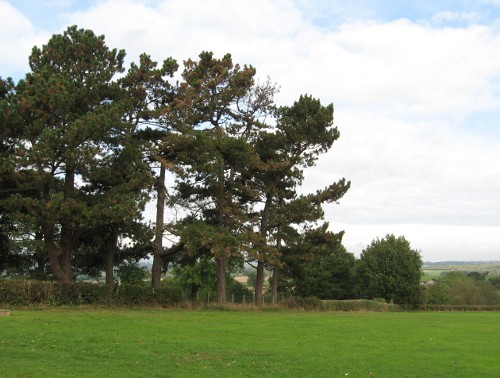 This is a tree I have been familiar with all my life, and yet never really known; it has always felt rather remote. In its wild state, it stands high on the hillside on dry soils, often in small groups pointing the way. The Six Pine Trees of Pooh Bear’s world are a landmark and indicated on the map although little featured in the stories. Arthur Ransome had a pine tree to hold a lantern marking the way through the rocks into harbour in ‘Swallows and Amazons’, then in ‘Swallowdale‘ a row of four pine trees pointed the way on an otherwise bare hillside. Alfred Watkins wrote in ‘The Old Straight Track’ that Scots Pines had been marking ancient sites on Leylines for millennia, despite the fact that he admitted to never having seen an old tree. He was most likely wrong in the timing, since many Scots Pines were planted in England by Landscape gardeners and artist landowners of the eighteenth and nineteenth centuries seeking to romanticise the countryside, tumuli being particularly prone to new plantings of Pines or Beeches, but right in them as a landmark. Single trees were often left when others were cut down in order to mark drovers’ paths, some of which may themselves have followed leylines. Single trees were also planted in the Highlands of Scotland to mark the burial sites of warriors, allowing their spirits to climb the tree into other worlds.

Scots Pine is one of our three native confer trees (the others being juniper and yew), with the Caledonian forest dating back to the last ice age. It is a fast-growing, short-lived tree compared to many, but will grow from seed in its own shadow and thus regenerate without the need for a natural disaster. It will also grow happily with other trees such as birch or larch, sheltering them as they grow without casting too much shade. Many animals rely on pine forest, or the blaeberries and cowberries that frequently grow in its shade. Notable species include red squirrels, pine martens and Scottish wildcats, as well as birds such as Scottish Crossbills, Black Grouse and Capercaillies. Roe and Red deer like eating pine so much they prevent the natural regeneration of the forest. Wolves, Bears, Elk, Beavers and Lynx all used to live in the pine forests, the latter two may do again as there are many who wish to see their reintroduction. Sadly it is often treated as a monocrop in plantations to produce construction and joinery timbers, or telegraph poles, forests which have no understory and support very little wildlife.

Pine is very high in vitamin C, and the needles can be used to brew a healing tea for bronchitis and other chest complaints. The smell of fresh pine is good for clearing congestion, clearing the blocks in what we can see and uplifting us. Pine trees reach for the sky. This is particularly relevant in the middle of winter when many of us need a boost, and gives us a good reason to have a pine tree in the home for a few weeks! In fact it was the huge pine bonfires lit at Yule in various parts of Northern Europe which gave rise to the tradition of the Yule Log, and later the Yule or Christmas tree.

In Roman times it was not Yule that celebrated the pine tree however, but the Spring Equinox. The Earth Goddess Cybele turned Attis, her lover, into a pine tree after an incident in which he was unfaithful to her and then castrated himself in remorse. In some versions online he appears to have been tied to the tree and gored by a bull or a wild boar. I have read two endings to this sorry tale, that the tree was burned after three days and Attis was reborn from the ashes, and that Zeus later made him evergreen so that Cybele could have him as a companion all year. The Spring rites paralleled those often enacted in late summer with the corn spirit: in a three day ceremony, March 22nd-25th each year, an effigy of a man was made and attached to a pine trunk and bedecked with flowers. The second day trumpets were blown, and on the third a sacrifice, usually of blood from the Priest, was made to appease the Earth Goddess in order that Attis may be resurrected and the fertility of the Goddess restored.

The pine cones were often seen as phallic, continuing the male fertility theme from Attis and Cybele – despite actually being the female flowers. The double spiral formed by the seeds was also a symbol of life and fertility. This may be where the idea of pine being an aphrodisiac came from… Pinecones are sometimes fixed to the end of a staff or wand and used in fertility magic, while pine needles are sometimes used to purify a space and remove any negativity.

Finally from an art and crafting point of view, pine is used to make paper, the sap is used to make turpentine for painting and varnishing, and rosin used for giving friction to violin bows. And when a break is needed, it formed brewer’s pitch to line beer casks, and its close relative sabina pine flavoured retsina wines. 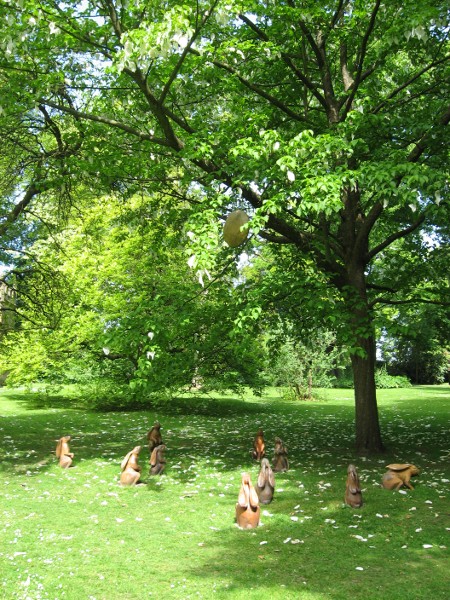 I came across this wonderful garden sculpture last weekend, while doing “essential research” for planning the redesign of my garden. (This garden is a little bigger than mine however…) It consists of ten wooden hares, nine of which are mesmerised by a full wooden moon hanging in the tree above their heads.

The hare has inspired many legends thanks to its unusual behaviour, such as boxing which is apparently females boxing males to either prove their strength before mating, or else fend them off. Until relatively recently it was believed that hares were hermaphrodite and changed sex each month – as late as the nineteenth century valuations in Wales did not specify the sex of the animal unlike for cats, dogs, or any other farm animal. Hares do not mate for life, and do not have much of a family life. They are born fully furred and with eyes open, and can just about survive by themselves if they had to. Each leveret will have its own ‘form’ or nest for the mother to visit, constructed in some long grass to give shelter, so they learn to be independent and solitary from the start. It was said that hares can do superfoetation, that is be pregnant twice over, with each pregnancy at a different stage. Science has apparently yet to prove this one way or the other. However it is known that one doe can produce 42 leverets in a year, which is a pretty high fertility rate for a mammal.

They are often said to be shape-shifting witches in disguise, particularly during times when witches were feared. Their solitary nature, being active at night, and being unpredictable and illogical in most people’s minds rather than recognising their intuition led the two to be associated. In British mythology, the Goddess Eostre was said to change into a hare at the full moon, the hare was sacred to the Moon Goddess Andraste, Ceridwen changed into a hare, and Freya was attended by hares. Boudicca used hares for divination, releasing them before battle and seeing which way they ran.

Hares are closely associated with the Spring Equinox, as it is the one time of year when they are seen to gather in droves, for reasons not yet understood. It is also at this time they are seen to box, run in random directions or in circles, roll in the grass, and generally behave like ‘mad March hares’. In more recent times the relationship with Eostre is cited for a reason for celebrating them at the Equinox, and also because their sex brings balance, which is the key to the energies that surround us at that time. Like the moon, they symbolise resurrection as they go through the birth, growth, reproduction, death and rebirth cycle at great speed. Male hares can supposedly give birth, having got themselves pregnant, and they are even said by some to lay eggs, like the picture of the hare in the moon holding an egg. Some see the hare’s egg as a cosmic egg which contains the seeds for all life.

Equally interesting is the tree, which is a handkerchief tree, Davidia involucrata, which was in flower when I saw it. (The flowers were all a little high for photographing individually, and just past their best.) Also known as the Dove tree in its native China, a tree of peace, seed was brought back to England by EH Wilson in 1901. It is the sort of tree that still gets mentioned in the newspapers here when it flowers, because it takes several years to reach flowering size and is still considered to be a rare sight. It was never widespread and remains endangered in the wild.