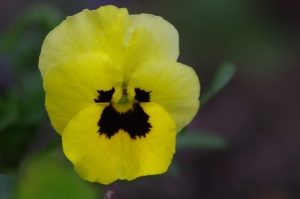 I’ve never grown pansies in my garden before, except occasionally the wild Johnny Jump Up from seed, but my daughter is fascinated by them. The rich depth of colours, the softness, the fact they flower when little else does. So over the holidays I took her with me to buy some plants and allowed her to choose which ones she liked. I ended up buying twenty four mixed pansy plants covering just about every shade between them – which earned me some very strange looks from my prize-winning horticulturalist neighbour, and also ex-boss, that I happened to meet with my trolley-full! (His garden is a little different to mine…)

Actually there was some logic in my apparent madness. The unpredictable winter with its late snows (by local standards) has left many gaps in my borders, and as I haven’t been growing so many flowers from seed over the past few years, I do not have a ready supply of new stock with which to fill the gaps. I figured the pansies would bring happiness, especially to M, and would hopefully last all summer. If most are gone by next year then at least I will have more time to plan something else new!

But as I started to get them out of their pots for planting, I had a revelation. I realised that if regrouped them into their approximate colours, I could reduce the crazy mixture to approximately four colours: dark red, mostly yellow, purple-blue, and white with a bit of dark purple.

I have a vague colour theme going on, inspired by John Fothergill and his writings about his pub garden in the 1920s, (An Innkeeper’s Diary, published 1931), placing hotter colours near the house and fading out to white at the furthest distance to make it look further away. It works well in my small garden, as there are fields beyond, and helps me decide where to put a plant – although some seeds don’t read their labels like ‘yellow’ hollyhocks turning out to be pink, or Welsh poppies seeding everywhere they can, so I’m not too strict about it! So I mostly followed my usual scheme with the pansies, M helping me to place them around the garden in colour groups, mostly three or four at a time with me helping to show where geraniums or campanulas or giant scabious were about to be, and suddenly they looked amazing. Blending in tastefully, yet full of cheer. I really enjoyed the sight.

However, trying to take photos of them to go with this post revealed another problem that I hadn’t considered: several of the flowers were being eaten. Being edible to humans, and also freshly grown, they must have appeared to be a new delicacy in my garden compared to all the hardy plants that had survived outside all winter. I have never liked to use poisons in the garden, preferring to find natural solutions and letting the garden balance itself over time; copper rings made out of an old hot water tank are one of my best against slugs, but I didn’t think that was the problem here, since it was the flowers being eaten rather than the stalks. A few days observation finally revealed the truth. Pigeons.

Immediately another incident in the holidays with M came to mind, when I had to wait at a zebra crossing because a pigeon was using it. I had watched as the bird looked both ways at the side of the road, in the way pigeons do, then walked very fast all the way across, exactly in the middle of the crossing. I didn’t want to run it over, so I ended up having to stop while it completed its journey to the other side and then over to investigate the gutter. My daughter of course found all this hilarious. Given the Highway Code says drivers must stop when a ‘pedestrian’ is on the crossing, rather than specifying a ‘person’, I presume this was what I was required to do. I now wonder whether I should have reduced the pigeon count slightly, as I am getting a little fed up with them. 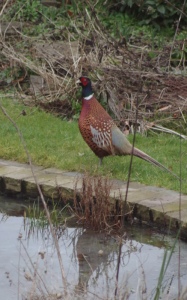 Cock pheasant seen from my window. (There is a layer of ice below the surface.)

One more possibility springs to mind however, before I curse the fat grey birds, as we had an even more unexpected garden visitor recently that makes a pigeon look tiny…