Many years ago, when we had family holidays on a narrowboat, I got interested in ropework. New ropes always needed ends or loops splicing, many different knots needed to be tied quickly and accurately such as a Lark’s Head, Round turn, Half Hitches, Clove Hitch, or a Bowline in its various forms. Occasionally I had fun trying out some of the more decorative knots; I have used a monkey’s fist as a keyring for many years.

One knot I never found a use for was the Turk’s Head, as we didn’t have the sort of tiller that needed ropework on it. It is a knot or braid that could be used on any cylinder, particularly where a marker or a handgrip is needed, I forgot about it for many years, until I recently became interested in the idea of making simple bracelets or necklaces out of knotted leather cord. Paracord has become popular for knotting and wearing, and the Turk’s Head often photographed on the cover of such books; however I particularly wanted things that were natural and untreated, and that I could wear to connect me to spirit. What works in rope should work in leather cord, I thought! 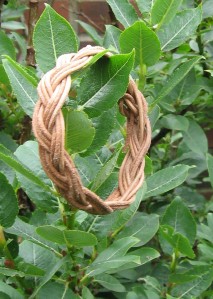 This was my first one, which I still wear sometimes. It is not perfect, being a little loose in the weave, (leather does not slide easily over itself like modern ropes and cords do, nor can I simply heat-seal the ends in place) but I like the simplicity of the triple nature of both the braid and the number of strands. Nine is usually the number of Spirituality, of completeness – there are nine complete circles of the leather tied in a never ending ‘Eternity’ knot. Three on its own is the upper, middle and lower world, or the number of potential, creativity and self-expression. There is another number woven in that I didn’t expect, and certainly didn’t plan for – master numbers eleven, or twenty two. These are the number of curves or bights on each side. Eleven is the ultimate in creativity, while twenty two is capable of putting the creativity into practice.

Wearing it, I feel an inner knowing that everything is connected. It seems to help when I am feeling stressed. I also feel a connection to the three worlds. I have woven friendship bracelets and similar items using embroidery threads and felt connected to the triple goddess, but this is different, more primal, more basic. It connects to the Earth, to animal kingdoms, and to plant kingdoms, yet with an awareness of what also lies above. And it wants to get things done. Most unexpectedly, it has formed one of a series of recent lessons to me in how wearing a particular piece of jewellery can influence me in a positive way. Somehow I feel more will follow, as its work is not yet completed.