Last week I was in the Land of Dragons, otherwise known as Wales, for a family holiday. I hadn’t made the connection before going, despite having briefly visited Wales in early June, but then it has been a few years since my last proper visit and nationalism seems to have grown in recent years with Welsh flags on display most places we went. So to see a lot of dragons in a country for which they are a national symbol of pride shouldn’t come as a surprise. However, this went a step further, starting before I even left home.

The day before going, I was having trouble in my meditation with a lack of concentration for various reasons. I persevered, and then suddenly a small fire dragon bounded in. I haven’t met any dragon like this one before, dark orange, flames everywhere, very small (only waist high and four foot wingspan) and behaving like a small puppy bouncing about, chasing its tail, and utterly full of life. We agreed I could call him Fireball. Exactly what I needed personally at that moment.

He then said it was good to see me again!!! Apparently I have known fire dragons before, although this is definitely the first time I have seen one in this lifetime. Meanwhile, I was told he would be coming on holiday with us, and was really looking forwards to it. Fireball looks a little like a Welsh dragon, but there are some differences; he is more like the colour of ripe Rowan berries and his wings are smaller in proportion. 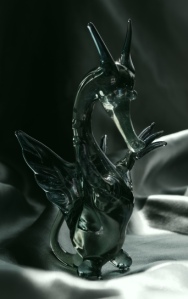 So day one, we set off heading for the far side of Wales, and the first place we stopped was a craft shop I have been past many times in canoeing days when it was closed – known as the Glassblobbery. As an occasional glass artist I was intrigued. So in I went, and was confronted with a glass dragon. And another, and tens if not hundreds of them in the shop, amongst various other glass animals and flowers. And the demonstration the man was about to do was a dragon. I found this delightful little chap there. (He is actually a pale blue-green colour.)

Day two, Dinas Emrys seemed to be the place we had to go to. Despite visiting Beddgelert many times in the past, I hadn’t been there – and it seemed a good size for M’s first Welsh hill. And of course it is entirely bound up with the legends of dragons.

Dinas Emrys as seen from above Sygyn Copper Mine. It is the small hill on bottom right.

Dinas Emrys – waterfall that is passed on the way.

The first part of the legend comes from The Mabinogi(on), a collection of ancient Welsh tales written down in the twelfth and thirteenth centuries. After Beli Mawr died, his eldest son Lludd became king. He was wise and generous, but after many years of peace he was hit by three curses – gossip, shrieks on Beltane that terrified the people and withered everything, and vanishing of food that was stored, turning the country into a wasteland. Luckily his younger brother Llyfelys, now king of France thanks to marriage, knew the remedies to the curses. While the first was caused by the race of Coranians, who Llyfelys had the way of removing from the land, and the third was caused by a giant who became loyal to Lludd after being beaten by him in a fight, the second was caused by two dragons residing in the centre of his land who each year fought for supremacy. One was their own dragon, the other that of a foreign race, trying to overcome it, causing the native dragon to cry out. The centre was traced to Oxford, where they found a stone circle and a murky lake. Placing a cauldron filled with mead next to the lake, covering it with a cloth and disguising it with the mud, Lludd then placed wax in his ears and retreated to the stone circle for safety. As it grew dark, he felt an awesome shudder from the earth and knew the screams had begun. From the lake, two serpents, one red, one white, rose up from the deep, water dripping off their scales. The battle continued as they shape shifted many times until they resumed their true forms, fire and ice breathing dragons. Up in the air they fought, snapping and snarling, until finally exhausted they transformed into two piglets and fell back to earth, through the cloth and into the cauldron. There they drank the mead and fell into a deep sleep. Lludd quickly put each piglet into a stone jar, placed them on his cart and drove non-stop to the most secure part of his kingdom, Eryri (the mountains of Snowdonia). Finally he came to a hill called Dinas Ffaron Dandde (Hill of the Fiery Pharoah), just below the highest mountain of all, Yr Wyddfa. There in the hollow summit he found a pool, into which he hurled the two stone jars with all his strength. As they splashed into the water, the lake was swallowed by the hill, now renamed Dinas Emrys, leaving nothing but grass and stones.

A little later in history, after the Romans left, King Constantine had two sons, Ambrosius and Uther. Unfortunately he also had a ‘Prime Minister’ Vortigern who coveted the crown, and who arranged Constantine’s death by a band of Picts. (Constantine’s young sons where whisked off to Brittany for safety.) Vortigern then invited the Saxons to get rid of the Picts – and gave them Kent in return, which worked fine until the Saxons wanted to take over Vortigern’s land as well. Barely escaping from a ‘parley’ with his life when the Saxons drew knives, Vortigern fled to Dinas Emrys and attempted to build a fortress there. However, while his men worked hard at the building work each day, every night their efforts were undone and they had to start all over again. In frustration, Vortigern consulted his wise men, who said he must find a ‘fatherless boy’ and sacrifice him over the hill to appease the spirits. The child found was Myrddin Emrys, whose mother had apparently become pregnant by an incubus spirit, so was still a virgin and the boy was baptised to remove the spirit from influencing him. However it seems most likely his mother was a priestess of the ‘old faith’ and took part in a pagan Great Rite with a masked stranger intended to create a child of destiny who would become a teacher and saviour of his age – and then adopted the Christian story as times changed. The child, later known as Merlin, escaped from his captors and persuaded the men to dig into the hill – where they found a lake as he predicted. Then he said in the pool there were two stone jars, each of which contained a sleeping dragon. These were found, the dragons were released and fought, the red dragon killing the white dragon, and peace was allowed to return. Vortigern’s castle was then completed and named Dinas Emrys in honour of Myrddin Emrys, (yes the second time it was apparently renamed Emrys; there is a suggestion it was actually Emyr meaning Emperor, Lord or King, possibly relating to the Emyr Llydaw, which was the Welsh name for Brittany but I digress) and the red dragon has been celebrated in Wales ever since. Meanwhile the young Merlin gave a prophecy and a warning about the Saxons, and Vortigern took his advice to flee for his life. Ambrosius and Uther had now come of age, returned from Brittany, and hunted Vortigern until he jumped off a cliff to his death.

Dinas Emrys and the rock remains. There is also some natural rock to walk up just above this.

Dinas Emrys was a gathering place for tribes in North Wales for at least 1500 years. Whenever danger threatened, they retreated to this heartland to take council with each other; I have seen it suggested it was an Omphalos, or Sacred Centre. The Slovenian artist and Earth healer Marko Pogacnik would probably call it part of a ‘nature temple’, somewhere that acts as a focal point for all the elemental kingdoms and has a far reaching energetic influence on the surrounding lands. Part, because it is also feels connected to Llyn Dinas in one direction, and the confluence of the Glaslyn and Colwyn rivers at Beddgelert in the other.

It is quite a special hill to walk up, with three ‘gateways’: first a water crossing (stepping stones optional, there is a stone bridge), then a tree gap and then a narrow rock gap that was once part of a Norman fort to the hill above. There is also a rather fine, carved, wooden dragon bench we found on the return route. 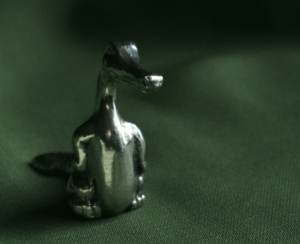 Day three: after the first two days, I was excited to find out what the dragon connection would be next. It was wet, so we headed to Llanberis – where I found this tiny fella made of pewter.

Day four brought a totally unexpected connection – I met Fireball by a very fine Rowan tree when coming down a mountain path. (Since I have more to say on rowan trees, I’ll continue this story next time.)

Day five saw red dragons following us along the Welsh Highland Railway, where they have a really beautiful symbol on the end of their station benches – everywhere except at Porthmadog that is, so I wasn’t expecting to see it (and didn’t get a photograph – it was raining at some of the other stations.) Some of the carriage tables also have a nicely drawn dragon next to a map of the line.

Day six was all about fabric dragons, in a wonderful exhibition of Josie Russell’s framed fabric pictures and in 3D toy dragons. Fireball suggested (or I interpreted) before I left I could look for a soft toy dragon and he would like that, but when it came to it none were accepted by the family for various reasons. So I have another sewing project, to create one that is ‘right’. So far, however, it is proving hard to visualise what it should look like as Fireball never sits still! Watch this space…

Finally day seven and eight both saw rather fine metal dragon sculptures, both painted red and both totally unique.

On my return I asked Fireball for some more details about some of these, included here, and then was told he would meet me on Dragon Hill in a week or so’s time. I can’t think where Dragon Hill is at the moment, but I’m looking forward to it already.