Spindle is now published on its own page under ‘Tree Stories’, or follow the link here.

This has been an interesting story for me to write – mostly for all the wrong reasons! It was started in February and I had the basic outline, and then learned in a meditation what the next story should be and that this one was done; it just needed writing down. Well that was it, I couldn’t write another word and had a complete block. For other reasons I then took a break from creative writing for a few months, but still there was this story waiting to be written down. Finally in September I managed to get back to writing and get this story finished, but I no longer felt inspired by it in the same way; I had moved on. So instead, it became an exercise in editing and determination to try and make something of it and do justice to what is a lovely tree just coming into it’s brief season. Strangely though, persevering has been satisfying in its own way, as well as freeing, like I had passed through some barrier, or completed a test successfully.

After finishing the story, I then discovered Spindle symbolised completing lessons in order to move forwards, for the sake of honour rather than reward! Clearly I hadn’t connected sufficiently to this tree while writing the story, or more likely Spirit wanted me to experience the lesson in a very personal and direct way.

Spindle is sometimes listed as the 22nd ogham Oir, which is also known as Gold and therefore associated with wealth and inspired knowledge. Spells using Spindle can apparently be long lasting. When Spindle appears it often heralds unexpected positive things happening as revelations or thunder and lightening go with this ogham. It is also associated with community – to develop knowledge and wisdom of the right relationship with others in the community (another theme which unexpectedly came through in my story), as well as that wisdom giving the right and obligation to question authority when necessary. Finally the Spindle Tree, separate from oghams, is traditionally associated with crafts and creative endeavours, since the spindle was such an essential part of European culture being carried by most women and used daily until the development of the spinning wheel, and so can be used to gain creative inspiration.

Spindle wood was used for spindles, bobbins, knitting needles, pegs, skewers, toothpicks, or any other circumstance where something small yet strong was required; the fact that it splits easily also helps to make thin, pointed items. Other uses include watchmaker’s cleaning tools, organ keys, and ear studs made of Spindle have been found on Dartmoor that are 4000 years old. Spindle also makes high quality charcoal for artists. Oils from the plant are used in soap, and a latex compound from the roots is used to make rubber, used in insulation for electrical components amongst other things, and plastics.

The flowers attract a variety of insects including bees, hoverflies and aphids, holly blue butterflies and several species of moth, and subsequently several songbirds. However the tree is poisonous to most animals including humans, the exception being goats which can browse on it quite happily. As a result, the ground berries have used for getting rid of head lice or as insecticides, and infusions made by boiling used for acne and other external complaints. In parts of Africa the berry juice was used for poison arrows. The berries were also used for a yellow dye (or green with alum), which some people used for colouring butter. 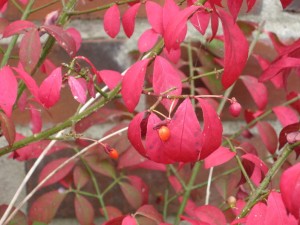 Relatively fast growing to about 6m in height, it can be invasive, but is not long lived. In England it is now under threat; however some parts of the country, in particular the lower slopes of Dartmoor, seem to suit it well where a 2007 survey found it growing in 9% of hedgerows surveyed. This photograph shows not Euonymus europaeus, which has such wonderful pink berries in their bright orange cases, but Euonymus alatus ‘Compactus’ which is a dwarf form and grows in my garden giving delight at this time of year.