This display quilt just got made in time! Mainly due to the fact that Winter returned with snow in early March closing all the schools… Instead of daffodils, often flowering here by the end of January, snowdrops are entering their fourth month of continuous flowering.

As this festival is about balance, I wanted to do a very square design. Most of the colours I had that were suitable were not patterned either, restricting my options. However I found that this added to the calm, balanced feel, even if the weather is being wild. Like at Imbolc and Yule, there is a more definite pattern to this quilt than some of the earlier ones, which I find I prefer.

The colours were based around what I normally see at this time of year, so lots of new fresh greens, daffodils, pink blossom, blue skies. At the moment, the purple crocuses are doing well, usually much earlier, and the only pink I have seen is my winter flowering Viburnum bodnantense ‘Dawn’. Just before the equinox we had a very deliberate removal of anything ‘Wintery’ and changing to Spring, hoping to help draw it forth. So the display includes a woolly lamb we made in the Lake District (I’ll have to do some more for Imbolc next year so it doesn’t get lonely!) hares, flowers, fairies, and lots of eggs.

In a beautiful demonstration of succession, this is the same patch of woodland as the wild daffodil photos I took at the end of March.

They are a little more spaced out than elsewhere in the wood, and therefore slightly less of a blue haze (even allowing for the less than ideal light conditions) – I presume this is because they are sharing the rootspace with other bulbs. 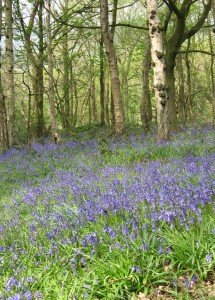 It may also be because they prefer different conditions – these two photos are from another area with silver birch and hazel rather than beech and sycamore. (Click for larger images.)

Apparently the Equinox, last Sunday, was the first day of Spring. This year with hawthorn coming into leaf in January, and daffodils even earlier, Spring seemed to come before winter. Then we finally had some snow, some frost, and nature seemed to sort itself back into the proper order of doing things. So now we can properly enjoy Spring – and the sunshine that filled the Equinox from start to finish.

I spent the day outside, which included a walk in some woods where wild daffodils grow. Narcissus pseudonarcissus is not generally reported as being in Derbyshire – the Lake District, Yorkshire, Gloucestershire, and South Wales being its usual haunts, but there is a small area of woodland north of Derby, surrounding the remains of a castle (the stone was plundered for building Kedleston Hall), where it grows in abundance. Only around 6-7” high, they make small delicate clumps and do not make the sort of show that we think of from daffodils growing en masse; it is certainly not an unmissable haze of colour, like the bluebells will produce nearby in another month or so! But their delicacy makes them special, as does the fact they only fully open in warm sunshine.

Daffodils are poisonous; they were used to induce vomiting, eating a tiny amount (if mistaken for onion) can kill, sap can cause dermatitis, and even regular handling of the bulbs with bare hands can cause similar problems. I have read that the Romans introduced them to Britain as they carried a bulb in their pocket to use as a suicide pill. However more recent research has revealed treatments for Alzheimer’s Disease, for Leukemia, and for Depression.

It is said to be a flower of the dead and the underworld, after Persephone was distracted by daffodils and Hades abducted her. They are often planted on graves, and can be used for death and rebirth ceremony or magic. As a symbol of new life and regeneration the daffodil is remarkable for its ability to return each Spring no matter how hard the winter has been; it is one of the few bulbs that will thrive almost anywhere, on every council roundabout and roadside verge, unlike fussier types like tulips. Alternatively the ancient Greek may refer to the Asphodel – which would be an equally good choice in ceremony, but rather less good as a hardy garden survivor.

Daffodils are, however, associated with Narcissus who pined and died for the love of his own reflection; its cup is said to be full of his tears. To some the daffodil therefore represents vanity and unrequited love. This ‘narcissism’ can be turned into a positive where more self-love is needed: its strong yellow colour and sunny attitude will help strengthen the solar plexus chakra which holds our sense of self and personal power, while the green stem and leaves link it to the heart chakra, that of love.

Wild daffodils like sunlight, and mostly they grow in fields, by hedgerows, or in coppiced woodland. The woodland I know is mostly young, but the bulbs still grow in their greatest profusion on the south-facing slopes on the edge of the woodland. I will have to see how well they survive in the absence of further coppicing. Meanwhile they remain, for me, one of the surest signs of Spring.