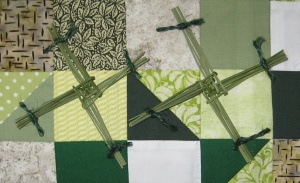 Finished crosses on the display quilt (after several days of drying time.)

One of our current family traditions is making Brigid crosses out of rushes. It is a fun, simple activity my daughter and I do together, and talk about who Brigid is and the festival of Imbolc itself. The crosses are the end of the process however, the first part is to gather enough rushes to make a cross each.

This year the responsibility of rush gathering fell to me, since I was the only person free last Friday. Previously we have collected them together, so I have had someone to pull me out of the ditch and laugh at my wet foot…

The weather was cold, snow was forecast but missed us almost entirely, meaning it should be easy to gather a few stalks. But where? Rushes are one of those really common plants that you can never find when you need it. I had been keeping a lookout over the previous couple of weeks or so, but places I have seen rushes in the past were bare of them. Land dries out. Houses get built. Sheep and cows eat them. The drainage ditch, used previously, was not an option this year. Luckily a walk in January along a footpath new to me showed me a currently ungrazed field where there were some rushes growing, although having driven there to save short legs the boring bits and spend more time doing good or new bits, it was further from our house than I would have liked.

I decided I could manage the walk, a 5-6 mile circle, if I took a snack and had a rest somewhere and put my trust in Brigid. I treated it as a walking meditation on Brigid and Imbolc.

It seems very fitting that the plant I was looking for grows in damp ground, and the first single plant I found was by the start of a little stream. Brigid is of course known for her healing wells and springs – as well as fires, hearth and home, where the crosses are traditionally placed once made deepening the connection with her. (Ours are on our mantelpiece.)

However, I did not want to pick all from one plant, and this one was so perfect, being protected from horses by the tree, it didn’t seem right to take any. A second plant grew by the fence so I gathered a few stalks, but not enough for a cross.

I continued up to the next field, where there were a lot of rush plants in the boggy ground from which the stream flows, but all had been cropped close to the ground.

Gentle but very curious cows on the footpath.

And then, a herd of cows across the footpath. Why should I expect otherwise on Brigid’s day? She kept me safe, and they gently moved out of the way before closing in again behind me. There were a few bullocks, curious and coming towards me for a closer look, but they seemed quite a calm lot, as (thankfully) were the longhorns I found later – complete with bull next to the footpath. I was very glad the mud by the squeeze stile was frozen solid, however.

The furthest point from home was not the rush field, but a small patch of woodland where wild daffodils and bluebells grow. It is noisy, thanks to the nearby dual carriageway, but that means if I can tune it out, a meditation is rarely disturbed. I waited to see which tree called me for a sit down – and discovered this wonderful oak.

Close up of the circle oak.

The hole was too difficult for me to risk climbing through without help, (I wasn’t sure if I would fit all the way, especially with the branch across the middle!) but after my rest and grounding on the frozen earth, I put my head through and felt the tree’s energies circling me. I stayed there for some minutes, exchanging energies.

Finally I left the woodland and descending, found my field, again luckily frozen (there is a good reason why I haven’t walked this path before!) with many small rush plants growing now the cows have been moved. I picked a few stalks from several until I had enough, they would make small crosses this year but size wasn’t important. In fact, I found later they behaved very well without splitting as thicker stalks can. Frozen myself, I put all in my rucksack, gloves back on my hands, crossed the stream and began the long walk back up the hill to home. I had a celebration to prepare for.