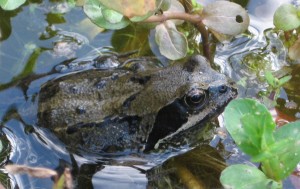 This is the first week that a frog has been spotted in our pond. Swimming, and looking happy.

There were two animals I really hoped to attract when building the pond – one was frogs, the other was dragonflies. From all I have read, importing animals or frogspawn is a bad idea; nature will usually turn up when conditions are right.

I have not written here about planting the pond, beyond designing a pot lifter to move the pots around in deep water. (See ‘Planting the Rain Pond’, 17 April 2016.) It has been an interesting learning curve for me, starting with the basics of understanding water plants, how many and what types are needed, what depths they like, and how to actually plant them when they arrive as bare-rooted specimens. General advice I could find was to avoid anything remotely invasive, put in more plants than you might expect, and allow time for a balance to be reached.

So I dowsed with my trusty pendulum to find out which plants would like to be in my pond, bought one of everything that said it would, three of each of the oxygenating plants that get planted in bunches, and then spent the best part of a day fitting the whole lot into pots. The weather promptly turned cold with snow, growth was at a minimum, and virtually nothing happened. It then got hot, algae grew and, with virtually no plant cover on the surface yet, the pond needed frequent topping up from water butts. Algae continued to grow, and most of the plants disappeared from view, and I feared would never be seen again…

There are probably more plants that absolutely necessary, but it has been fascinating to me to watch how they all grow so differently. Forgetmenots and brooklime have sprawled all over the place and leave trailing roots through the water that I suspect will attempt to invade their neighbours. Irises just sit there looking small. But the water hawthorn sent up flower stems very shortly after being planted, giving hope. Now all of the various plants seem to have recovered and are growing and flowering; even my waterlily, which I feared drowned for some months due to its disappearance into the depths, has sent up a flower bud. And the water soldiers have risen like a bunch of pineapples as the water suddenly cleared a couple of weeks ago.

So now I have a frog. I can’t help wondering if the fact I went swimming two days before for the first time in a few years, making new, deep connections with water and water elementals, had something to do with its arrival. I wanted to take a photograph of it, and of course couldn’t find it. Best evidence was rustling in some plants the other end of the garden, where frogs have occasionally been spotted before. I went back later at a similar time of day to when I had seen it before, mid to late afternoon, looked again in the branches of the scruffiest plant there, and this time found not one but two frogs in the pond! I guess the brooklime (Veronica beccabunga) will be staying…

Two frogs hiding in the brooklime.