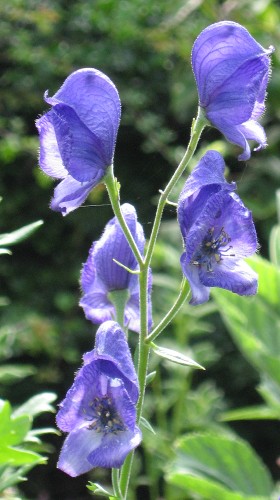 I first started growing Aconitums in the garden when I discovered it looked a bit like delphiniums but didn’t get eaten by slugs. Also known as Monkshood, thanks to the flower shape, or Wolfsbane thanks to its poisons; all parts of the plant are highly toxic.

There are few traditional uses for Aconitum, poisons for spear tips or arrows to kill wolves or tigers being the main ones, but some have used it on the skin as a painkiller for severe joint pain apparently, and horses can eat it when dried to give them a powerful narcotic stimulant. Used with Belladonna, Henbane, Hemlock and soot, it is said to produce a ‘flying ointment’ for witches – the landing may be a little more insecure than most of us would wish however! Modern witches have created a number of uses for Aconitum such as consecrating knives to banish old energies and give protection, burning at funerals, or when calling upon Hecate with whom the plant is associated.

Recently I have discovered Aconitum can be used for a very effective homoeopathic remedy for colds. Many homoeopathic remedies are based on poisons; my interpretation is that because of the way they are diluted and shaken to have a high energetic presence of the poison, the body is triggered into a reaction. However, as there is no actual physical poison there, the body’s reaction is used instead to fight the disease, in this case a ‘common’ cold. Magic. But not something I would want to prepare for myself…

So why grow it?
Besides being a way of becoming familiar with a great plant, it is actually very garden-worthy. A. napellus, pictured, grows to nearly six feet tall in my windy garden, yet never needs staking. It is a very pretty plant with a full four seasons of interest – the fresh young growth in Spring, flowers in Summer, good leaf colour in Autumn, and finally dried stems and seed cases through the Winter. It seems to be fairly undemanding, neither taking over nor being easily squeezed out, and grows happily in the middle of borders which conveniently ensures it is not brushed accidentally.

I see its parallel with Yew in the world of trees. Equally poisonous in almost all parts, Yew teaches us about death and transformation, letting us see the dark side of the cycle as a positive experience and allowing us to be reborn. Aconitum can be used to clear what needs to be cleared at a stroke, and see the fundamental truths. It is fast acting, being fast growing, but carries the power of renewal from the deep taproots. Having cleared, there is a store of energy there which can be used to create something new out of the ashes.